In an earlier post (Clear at Last) I describe conditions on the lake that I could barely imagine in September, two months earlier. Smoke from the Sawtooth Fire in the Bitterroots to the south and smoke from the Mustang complex of fires spreading from Idaho, plus smoke from 140 square miles of fire in Washington State have poured into Montana and filled every valley. These conditions awaken a primal desire to be near water. With several years of history leading retreats at Deep Bay, we receive permission to rent a timber-frame house at the retreat center. This visit will give me an opportunity to paddle from Deep Bay to Woods Bay, a direct route across the lake, west to east.

When I pull out of the deep pocket of the bay I lose sight of the bottom almost as soon as I pass between the black teeth that protrude out of the lake at the northeast corner of the bay. I don’t see the lake’s foundations again until I approach the armored point on the north side of Wood’s Bay. I am not only unable to see the lake bottom, I am unable to see the opposite shore. I was not alive in 1910 to see for myself, but I have read that the firestorm of 1910 filled the lake basin with so much smoke that some boats could not find their docks or ran aground, so poor was the visibility.

As I begin the crossing I can hear a few boats on the lake but cannot see them. This feels disconcerting, if not dangerous. Almost an hour later, when I finally see a boat, it appears suspended in the air. There is almost no distinction between water that looks like liquid solder and air saturated with gray smoke. After more than an hour of blind paddling I detect a faint finger where the forested peninsula just north of Wood’s Bay seems to be drawn along the water line.

I press on through the dense air, using dead-reckoning to help me navigate. I have almost no visible sense of progress. I paddle a thousand strokes but everything around me seems the same. This must be how it feels to a cancer patient trying to recover from the enervating effects of chemotherapy; how it feels to people trying to revitalize an institution in need of radical transformation; or, how anxious parents feel when young adult children flounder from part-time job to part-time job, looking for a footing on the continent of a more stable future. Today I paddle in faith that all these strokes will eventually lead to the opposite shore.

I remind myself not to hurry the process. I need to save a certain amount of strength for the return trip and the possibility of a shift in the wind and weather. I let images from the morning and the night that preceded it flow through my mind. I try not to latch onto anything in particular. I drift on the surface of thought. Stroke, thought, stroke…

Not being able to see into the distance, I focus on the near-at-hand. As I paddle I notice something I have never seen before: a series of narrow parallel lines peels off the bow of my boat and spreads in a widening “V.” As a boy I saw lines like these along the lower jaw of the blue whale in the Museum of Natural History where my father used to take me on my birthday. I wonder if there is a connection between these little lines streaming off the prow and the anatomy of the lower jaw of the great whales. Are the lines more than the pleats of a great expanding mouth, perhaps even an efficient way to channel the flow of water around a form that propels itself through water?

In time I spot what looks like either a buoy or a small sailboat a half mile to the north of my course. The smoke makes it very difficult to identify anything with confidence. I shift my course slightly to the north so I can approach and see this object more clearly. I approach close enough to see that this is one of the two instruments that the Biological Station has anchored in the lake. Having made the identification, I readjust my course slightly back to the south. I am beginning to pick up details on the far shore–a roofline, a water tower on the hill, a glinting window. Stroke, thought, stroke.

By now I want to get out of the boat, stretch my legs, eat the cookie I keep thinking about, get a drink of water. I find a tight little spot, a grove of cottonwoods, some drift logs, a shallow landing, and pull out. With my feet and part of Bluebird still in the water, I settle my rear end into the gravel, pull out my water bottle, take a long drink, and open the plastic bag protecting my now-late lunch. It feels good to settle myself into the red, tan, gray, and green stones, to feel the earth after making my way through water and opaque light. I pick up stones, examine their colors and shapes, look for fissures and lines, then put them back. Nearby, little white feathers from the ring-billed gulls drift in the bay. I drink in the water’s clarity, a clarity that seems strange when everything else is obscure.

I stow my few items of gear, slide my boat back into the water, and look back over my shoulder. A vague depression, a footprint, is the only evidence of my presence. I paddle out of the bay, slide past the breakwater, take one last look at the green cobbles on the bottom, knowing I won’t see the lake bottom for nearly two hours, and head into open water. This time I aim for the barely visible buoy to the northwest. In the smoky air it is again hard to have a sense of progress. I look away from the buoy so as to not feel discouraged. I have no landmarks to the left or right against which to gauge my advance. Finally, I see the anemometer on the top of the device, the yellow ring of the float, three solar panels, and a sign warning about potential shock hazard for those who disturb the equipment. I drift in and take a few photos.

This instrument, one of two anchored in the lake and coupled with land-based meteorological stations, comprise the Virtual Observatory and Ecological Informatics System (VOIES). According to the Flathead Journal this system measures air temperature, humidity, barometric pressure, wind speed and direction, light and other meteorological parameters. The instrument, anchored above a deep water trench, also profiles temperature, dissolved oxygen, light, water clarity and algal pigments up and down the water column. All the data is relayed back to the Flathead Lake Biological Station. The summer 2012 edition of the Journal describes what scientists have already learned from this new system. The instruments accumulate enough data to be able to predict weather and changes in water quality. In addition, Dr. Mark Lorang uses the data to develop models of water circulation and wave patterns. Dr. Bonnie Ellis uses the information to enhance her studies of the food web of Flathead Lake. The most immediately useful information is available to the public at http://www2.umt.edu/flbs/. Today, however, the instrument seems like a phantom floating on the water. It is strangely virtual. 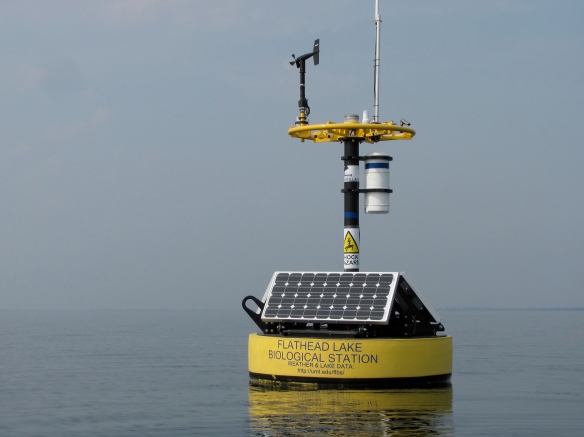 Pleased to have seen one of the two instruments anchored in the lake up close, I turn away and resume my paddle. I adjust my course a few degrees south, having come north to the buoy. But almost everything is guesswork. I know there is a far shore, but I see no indication of Angel Point, the meditation structure on top of the rock, no sign of the points marking the entrance to Hockaday or Hughes Bays. Every now and then I catch the faintest hint of what may be the few protruding rocks and trees of Goose Island. One moment I see the shape and the next I lose it. Trying to see this island is like looking at a star: look at it directly and it is gone; look to the side and it reappears. Far to the south I see the round gray-green shape of Cedar Island. I imagine my destination and stroke for it. Given the angle of the light, I once again feel as if I am stroking into radiance.

On the return trip I settle into a slightly slower rhythm. I am not especially tired. I simply have more confidence that this labor, despite the lack of visible progress, will return me to my starting place. I trust the cumulative effect of all these strokes, that infinite gray will resolve into green and blue, red and yellow, the black of water-licked stone. After an hour or so of paddling I discern the mass of the peninsula that protects Griswold Bay, the roofline on Cummins Point, the second mass of rock that protects Hughes Bay. Stroke after stroke I become clearer that the shape I first saw faintly is indeed Goose Island, that the entrance to Deep Bay lies just north of the orange landslide barely visible through the smoke.

I try not to focus on closing the distance between the dock and me. It is enough to keep Bluebird in motion and on course. Eventually I slide past a stone house I admire, snake through the teeth at the entrance to the bay, make the few last strokes across the still bay and pop the skirt. I lift Bluebird to safety for the night, change out of my booties and gather a few things I want to take up to Earth House. I have paddled through miles of uncertainty, leagues of guesswork, creating a triangle of about 15 miles.

Hardly anything is more satisfying than paddling in the crystal clarity of late May or in October after the first few frosts. In September I fear that paddles through a smoke-filled basin will become more common as global climate change becomes more severe, as more frequent droughts and attendant fires radically change our perception of “normal.” The effects of these changes fill even the most pristine places. I hike up the trail pondering our impact on the planet. At the same time I look forward to seeing people who have waited for my return. 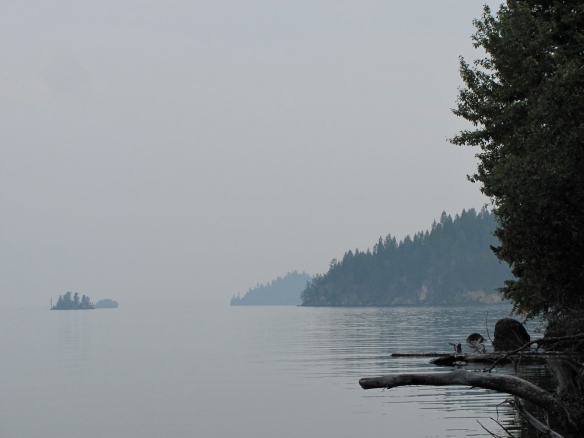