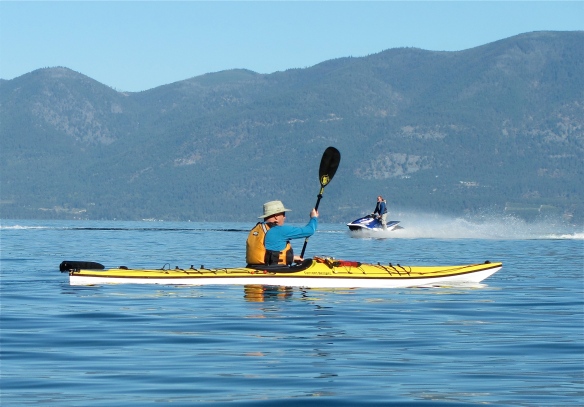 Different Ways of Being

After I wrote “A Perfect Summer Day” several people thought I may have been too generous toward those who race across the lake r on massively powerful machines. When I wrote more tolerantly than I sometimes feel I must have still been under the salutary influence of the lake. This post is an attempt to articulate more precisely what I feel and think with respect to this contrast, the contrast between the jet ski and the kayak.

First, I want to acknowledge that this is an old conversation, even older than Kenneth Brower’s attempt to address the same problem in his 1978 book The Starship and the Canoe. In this book he reflects on the difference between George Dyson and his astrophysicist father Freeman Dyson. The elder envisions a starship powered by the controlled explosion of nuclear devices while the son dreams of a wooden sea-going canoe. Undoubtedly, the conversation is as old as the day the Spanish introduced horses to the North American continent, or the first automobile rolled down a street, or someone on snowshoes encountered the first snow machine.

I once was asked to baptize two children at another large lake in Montana. The family that invited me to lead this ceremony owned jet skis and offered their use as inducement so I would honor their unusual request to baptize their youngest children in a lake rather than at church. Before the ceremony they convinced me to ride one of their machines. I confess it was really fun to make tight-radius turns, to leap over my own wake, and to speed across the surface at a hair-plastering rate. But after a few minutes I found the experience boring. It did not engage me at depth. I slowed down, motored back to the beach, thanked the family and thought to myself, I’ll never do this again. I did, however, baptize their children.

As someone who paddles a kayak, I notice that not every wave is the same. Some waves seem to have excavated the depths of the lake and carry in their bodies a hidden power. Some waves are like the whorls in a fingerprint; the angles of encounter vary with every stroke into their forms. Waves are not always parallel to each other. If for no other reason than safety, a paddler must pay careful attention to these changes. While paddling I enjoy the sounds of water sliding by the boat or lifting and dropping Bluebird in the interval between crest and trough. When I visit with people around the lake I occasionally hear people say things like, “The lake is alive; it is its own being,” or “We must learn its moods and respect them.” For anyone who is this sensitive to the world, who listens this carefully to the world embodied in the lake, passage through the water in the thrall of these energies and changing temperaments is part of what makes the encounter so varied and valuable.

For many people there is more than enough pleasure in speeding over the surface, arriving at a destination quickly, and feeling the wind wash over their skin. I once caught a wave in the open water off Yellow Bay and was propelled at a breathtaking speed. In those moments the boat belonged to the wave not me. I know the appeal of speed. But it seems to me that the difference between the kayak and the jet ski is similar to the difference between a Big Whopper received at a drive-through window and a meal at our dining table when my wife has set it with crystal glasses, candles, and her Pembroke china. It is similar to the difference between a You Tube video of the Wailin’ Jennies and a live concert at the Top Hat on a summer evening in Missoula when the temperature is 96 degrees. The difference between the two approaches to the lake is as great as the difference between driving through the Redwoods at Prairie Creek State Park and walking through them, smelling the duff, feeling the texture of the bark, having one’s face stroked by a little wand of moist and lacy needles.

The problem with technology generally, and the jet ski or powerboat in particular, is that its encounter with the world is shallow. It skims over the surface of experience rather than moves into and through the physical substance of the world. Some things are simply too fast. I often feel this way when I ride my bicycle across campus. Even this pedaled machine is too fast and its relationship to the world too shallow to allow me to adequately greet people I know, to recognize a person from a distance and recall a name as the distance closes. In much the same way, as a craftsman, I realize that one tool is occasionally too fast for a given task and that it is better to slow the process down, to create less momentum and open up more time for the careful consideration of consequences. Sometimes the rasp is better than the router.

One approach to the relationship with the lake requires the rider to listen to the machine; the other approach listens to the body and senses all the subtle but incredibly important changes that take place within it. As I paddle I register when I feel strong, when I am beginning to tire, when I need hydration or food, when the layers of clothing seem just right or need to be adjusted. I pay exquisite attention to every perceptible change in the weather—every shift in wind direction, velocity and cloud formations. In these situations where the pace is slower we read the lake through its effects on the body. In choosing a lower level of technology, a vessel like a kayak, labor and joy are unified and reconciled.

Except in the most extreme situations there is no such thing as being out of gas. In one mode of transportation the cessation of the machine is absolute and the silence that follows it must seem stunning; but in the other case, we are always capable of one more stroke. There are depths of strength in the body and mind that the machine cannot imagine. In these situations, perhaps after several miles of headwind, we find out what we are made of.

After more careful consideration of the problem this is what I think. Some might dismiss the distinction between those who go fast and those who make the passage more slowly as a problem of age. At 64 I should know; but I think the division is much deeper than the separation between young and old. It has to do with one’s whole orientation to the world.

I have seen people speed across the lake and throw their wakes wherever they please without any awareness of their effects on the water and atmosphere, much less a paddler. In the kayak or canoe one’s awareness extends outward to the whole living body of the lake, down into its depths, up into the sky, and during a night paddle, even to the moon and stars. The issue, it seems to me, is how far does consciousness extend. It is becoming clear to me that the character and future of civilization depends on this question and how we answer it.

3 thoughts on “Different Ways of Being: A Meditation on Speed”