On the evening of February 29, 2016, everything I read caused me to fear for the fate of our world. In The New York Review of Books I read Bill McKibben’s review of Dark Money: the Hidden History of the Billionaires Behind the Rise of the Radical Right by Jane Mayer, a book about the Koch brothers, their father’s association with both Hitler and Stalin and their own contributions to toxic waste and the manipulation of democracy. In the latest issue of The Smithsonian I read about the destruction of tropical forests in Borneo and the replacement of these diverse human and natural communities with the monoculture of palm oil plantations. I could not bear to finish the article on snow leopards and could barely take the measure of the extent of antiquity destruction in Iraq, Syria and Africa. At least I knew not to turn on the radio where I would hear another obfuscation, denial of responsibility, or piece of pandering on the eve of “Super Tuesday.”

Too late in the evening, because of its impact on restful sleep, I turned to a documentary of the 1500 km circumnavigation of Ireland by John Hynes and Sean CahilI. Watching the Rapid Media production (https://www.rapidmedia.com/adventurekayak/categories/video/7123…), I felt their anticipation as John and Sean set off from Old Head of Kinsale. I felt the blisters, the stickiness of sunscreen, the need for a shower and the exercise-induced hunger that almost no amount of food could satisfy. I felt their exhilaration as they paddled through sea caves and between massive black cliffs covered with gannets. I heard the rain on the tent, the whine of the gale, the effect of headwinds and the relief of a tidal assist.

All that I lost in sleep I gained in spirit as I watched two men make good decisions in the face of lethal forces, as I watched them take pleasure in companionship, as they returned to their starting point and the arms of people who love them. Kilometer by kilometer they absorbed the sea and its gifts, gained an intimate connection with the colors of their land, the musical names of its coastal features, and the kindness of strangers who became friends.

Watching the record of this long paddle and sensing the pride two men feel for their own country and its history, I felt restored to myself. I regained a grip on those values that secure me on the cliff of an unsettling world. People do not paddle a kayak to make money, to gain power, except over themselves and their fears. We do not paddle in order to hear the cheers of a fawning crowd or to congratulate ourselves on gaining more control over parts of the earth that are better left alone. Nor do we paddle in order to take advantage of other people under the cover of legal darkness. I do not paddle to escape the world but to become clearer about what matters in it. Paddling a kayak helps me see a deck compass in the moral fog. It teaches me not to lose heart in the face of headwinds from every quarter.

What did it matter that I could not sleep after watching this documentary? I have lost enough sleep thinking about people and market forces that destroy the world. Why not lose sleep imagining the grace of a beautiful human-powered craft? Better to lose sleep over the sound of the waves and wind, the joy of realizing a vision that ties a Celtic knot of affection around the beating heart of the living world. 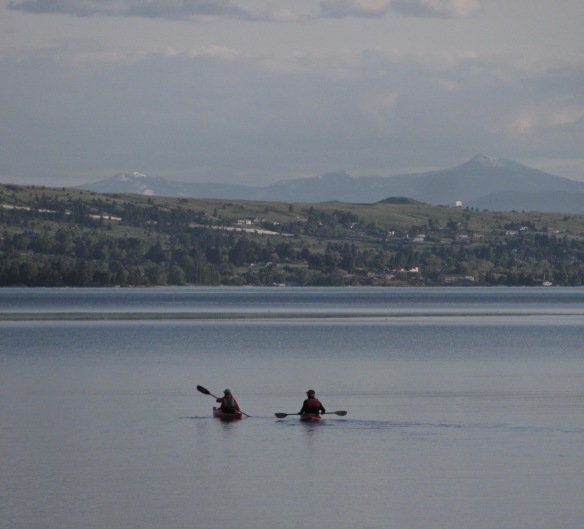 2 thoughts on “A Better Reason to Lose Sleep”