After a very cold October the weather of November felt gentler. The ground re-thawed and I found a better way to settle a couple of stones into the garden. I sprayed copper on my peach tree to control leaf curl. In the middle of November, I spotted a day in the forecast that looked suitable for a paddle. The predicted high was 45, the water temperatures held at 43 degrees and wind was not a significant factor.

Though I wish I were above such desires, I often go paddling in search of a gift from the lake or the process of being in the kayak. Sometimes I find a feather, an unusual pebble, a piece of driftwood, a solution to a problem I work over in the waves of my mind, or a growing sense of competence in my boat. While paddling I stay open to what the gift might be. Often, I encounter something unexpected.

I left town later than normal, around 9:30, to take advantage of the warmest part of the day, and arrived at the boat ramp about two hours later. Knowing that I need to dress for the water not just the air, I put a full dry suit over wool underclothes and stowed three pairs of gloves, my hands being the most vulnerable to cold.

As I pulled away from shore I was startled by a very large buck seasoning under a shed roof nearby. The head lay unceremoniously on the picnic table. As I began to stroke into the lake I did not have a particular goal. I simply wanted to experience the lake at this time of the year and did not want to put myself in a dangerous situation far from shore. Because the conditions allowed, I paddled to nearby Melita Island where I stood in the shallows of a crescent cut into the gravel. I changed from my light gloves to a heavier set with natural curves built into the fingers. This arrangement felt much better, since my hands would be wet all day. I now faced a decision: should I continue into the light breeze, using strength early in the day, or settle for returning to the north-facing shoreline where I could easily retreat to Walstad? The lake seemed to allow for a longer paddle, so I left Melita behind and crossed the strait to Wild Horse Island. I had never circled it this late in the year.

When making a crossing I fight an unconscious desire to paddle harder, feeling some anxiety about exposure. I kept reminding myself to slow down, to find a rhythm I could maintain over the two miles of open water. I reached the south east corner of the island as a construction crew arrived by boat to continue working on a new and beautiful passive-solar home. As I paddled up the east shore I saw how autumn’s winds had knocked down quite a few trees along the shore, or in some cases, around people’s cabins, branch piles telling the story. Along the way I noticed that a dock belonging to some friends was simply missing. Had they decided to replace an aging structure? Had a storm ripped it loose from its footings? I did not know; but remembering October’s weather, I was not surprised.

As I continued along the shoreline I realized I would be able to return to Osprey Cove where I had injured myself on May 29. With the lake 3 feet lower than when it is at full pool, the gradient of the gravel on the beaches is steeper. I pulled in close, lifted my skirt, and stepped out. I slid Bluebird up the gravel and pulled out my lunch for which I was more than ready. 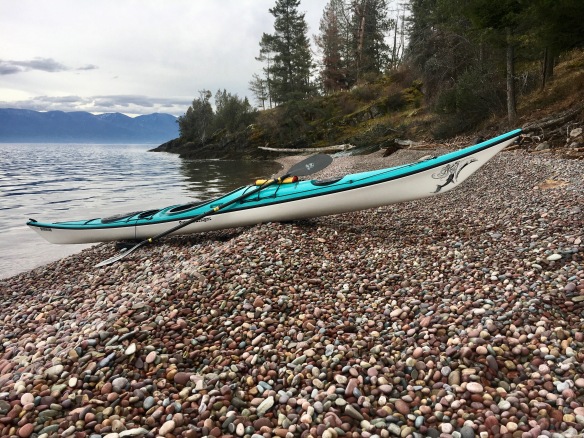 After a steelhead sandwich and most of a bottle of water I began to explore the beach. I was relieved to see that the blood I’d left on the stones was long gone—nature taking care of these things. On the edge of the forest I found what for me was an unusual skeleton. At first it looked like it had belonged to a fish, but what first appeared to be a skull turned out to be a sacrum. This suggested that an eagle had taken a duck, and after feasting high in the tree, had cast down the remains.

Moments later I saw a large aluminum boat approaching the cove from the south. They pulled into the cove, let the big diesel engine idle and drifted. Two men standing at the transom scanned the timbered slopes above the island. Curious, I got back in my boat and paddled alongside. I spoke first and asked if they were aboard a research vessel, knowing that the Flathead Lake Biological Station has a similar boat. The men looked puzzled:

Seeing now where they were looking, I tried again, “Looking for eagles?”

I looked where they pointed their chins and saw the bright head and big body of a female bald eagle in the upper branches of a Ponderosa.

Like them, I held the boat steady and enjoyed the stolid presence of such a magnificent bird, more than capable of picking a merganser, gull or cormorant off the water. I wished them a good afternoon and slipped away.

Throughout the afternoon I kept seeing this unusual boat with its long, open afterdeck and blunt prow. It powered up to Cedar Island where I have often found eagles, across to Elmo, back to the west shore of Wild Horse, and then down toward Polson. I surmised they were out in November simply for the joy of seeing eagles.

I paddled on, noticing changes—how a tiny foothold of a building on a northside lot had now become a cabin; how the island wore a beautiful necklace of woody debris in tan and gray, less visible at high water; how the leaden skies intensify the color of young Douglas fir trees born of fire.

To shorten the distance, I paddled off shore and did not go into Skeeko Bay but headed for the rocky point that marks its western entrance. In the distance I saw something strange, something in the water, something moving. I kept my eye on this spot as I closed the distance: a herd of 6 mule deer had walked out into the lake on the gravel that accumulates in this area. They waded up to their bellies and even their ribs, occasionally dipping their heads for a drink, if not a wash. They, too, were taking advantage of a gentle day. They, too, knew this spot where they could be in the lake not just on its margins. Because these deer are unaccustomed to predators, they let me approach, but they eventually turned and shook themselves off like dogs, something I had never seen before. I tried to get past the gate of the passcode on my phone so I could take a picture of this unusual behavior, but the thick neoprene would not allow me to get inside the phone. I considered pulling off the tight glove, but knowing how hard it would be to put it back on, I chose safety over a photograph and filed the image in my memory.

I settled back into the process of stroking for shore when I heard the deep thrum of the boat that followed me into Osprey Cove. The men kindly circled me at a distance, something weekend boaters never do. I appreciated the wide birth and enjoyed the huge rolling swells from their wake that lifted me several feet in the air and then set me gently back down.

The whole day the sun never showed itself, but in the south, down near the low topography of Big Arm, more light appeared beneath the heaviest clouds. It cast an orange glow on the water and combined with the shadows on the back side of little waves to create what seemed like a genetic code of light and shadow, a glimmering bar code of horizontal orange and gray dashes. I had never seen such light. This was the gift I had not expected.

In the way that climbers reach a summit by permission of the mountain, I had been granted permission by the lake to enjoy its gifts in mid to late November. I had nothing to tuck under a hatch or stow in a dry bag, only the gifts of transience, a big vessel passing at a respectful distance, its engine strangely comforting, light and shadow, the remains of life beneath a towering tree, the memory of deer moving out along a gravel bar far from shore. This was more than enough to carry me through winter.

2 thoughts on “Looking for a Gift”