On Friday, May 15, 2015, I officially retired from The University of Montana. This decision gives me more time to wander around the world in a state of amazement. Going out the front door to retrieve the mail can lead to astonishment, but when the mid-week weather looked promising I drove up to Flathead Lake to paddle my kayak, sleep in a tent, and rise at May’s early dawn to paddle again.

I spent the first afternoon exploring The Narrows. I circled islands, entered and paddled to the backs of long, deep bays left by the glacier’s retreat, and passed through the tunnel leading to Stone Quarry Bay. The evening invited even more paddling. After days of wind the lake was finally calm. Remnants of clouds created the perfect conditions for a striking sunset, and I would have enjoyed paddling with my next-door neighbors in the campground who chose to paddle slowly through the waning light. In the end I decided to sit in my camp chair, read poems by Marge Piercy, and let the changing colors on the textured water remind me of Impressionist paintings. 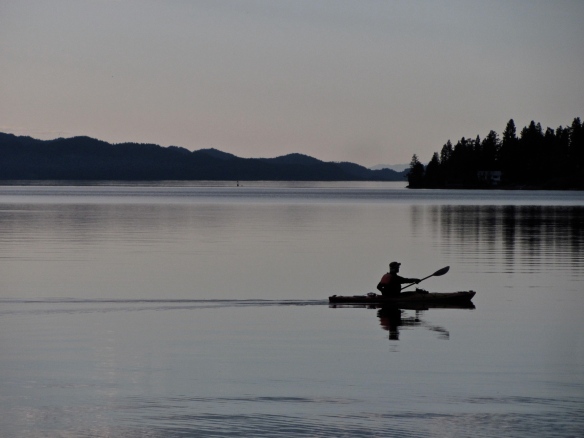 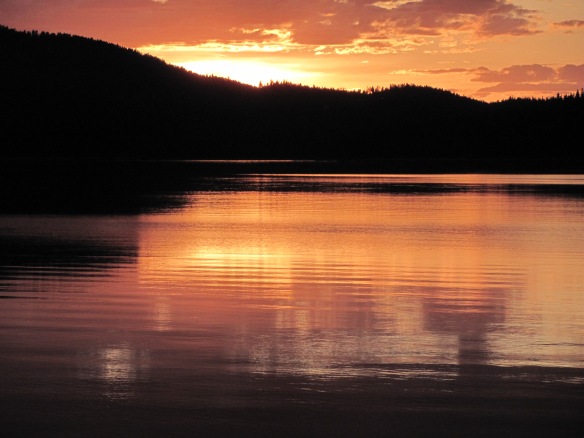 During the night I heard small waves collapsing on the shore. So when I crawled out of my tent at 5:45 I was not surprised to feel a steady breeze coming from the northeast. I have learned that waves on the lake grow not only in proportion to the wind, but according to how long the wind blows and over what distance. So, I drank from my blue water bottle, skipped breakfast and stepped into my skirt. I crossed Finley Bay easily as it is protected from most of the wind by the long peninsula of Finley Point. But as soon as I rounded the knob to the north I encountered the full force of the wind and waves. When I was in the trough between waves some of the approaching crests stood at eye-level. I pressed on toward Bird Island, my goal for the morning. As I paddled parallel to the island’s west-facing shore, passed the island’s northern tip, and made a 180 degree turn, the waves required my undivided attention; I did not even consider reaching for my camera or pulling into my favorite bay on the island. I feared getting trapped and pounded between the waves and the steep gravel shore. When it came time to make the turn, I waited for an interval between waves, made a hard fast sweep, turned south in the island’s lee and began to ride the backs of the waves toward home.

Even my silent approach set off alarms among the geese on the island. In relative privacy they nest, lay eggs, and hatch their goslings on this sanctuary. As I slipped by, geese stood erect on the black blocks of argillite, their breasts extended into the morning sun. In time pairs and small flocks of geese launched and flew in circles overhead. After the adults lifted off, younger birds, seemingly torn between their island home and their desire to be with their kin, called out in distress. When the distance between themselves and their family members felt intolerable they leapt from the rocks, beat their broad brown wings and slapped flat feet against the water until they were able to join their elders in a circle around my passing. A few family groups came together into an organized flock and flew, as a friend says, as a single organism. As thrilling as it was to paddle through the morning waves, taking water down my collar, I felt elevated, even lifted out of my boat, by everything happening in the air and light. I could feel the elastic bands of belonging between and among birds, their attachment to each other and the island. It was as if I had entered a web of light and flight. My ears filled with the sound of wind, breaking waves, and calling geese, my eyes with the strokes of these powerful birds. I sat for my morning feast of amazement.