The sun is beginning to rise through the firs a little further north each morning, even when dawn begins at fourteen degrees. I cannot help but think about paddling, even if the boat won’t go in the water for another couple of months. I turn the pages of the logbook and find a few things I want to remember as I prepare for another season. I don’t want my enthusiasm to get ahead of my experience. I want to recall a few paddling lessons.

I think back, for example, to a paddle I made three years ago in the first week of April. Wanting to become more familiar with the east shore of the lake I drove up to Yellow Bay. I pulled into the campground, named for the yellow rock on the north side of the bay, an Algonkian substrata, a Precambrian formation that also appears in Glacier National Park. I walked down to the beach, its broad fan exposed now because each winter the lake is drawn down to accommodate runoff from surrounding mountains. As I approached the water I spotted small, transparent plates of ice floating in the bay, the mica of ice. They made a tink, tink sound when I stirred them with my paddle. Despite the cold and a little breeze out of the northeast I decided to launch. When I stepped into the lake with my boat the water burned through my neoprene booties. Cold that feels like fire made me think of Elizabeth Bishop’s “At the Fishhouses”:

above the rounded gray and blue-gray stones…

If you would dip your hand in,

Your wrist would ache immediately,

Your bones would begin to ache and your hand would burn

As if the water were a transmutation of fire

That feeds on stones and burns with a dark gray flame.

The cold also brought to mind a diagram Tom Bansak gave me one day when I stopped by the Flathead Lake Biological Station. At these temperatures a person in the water would lose consciousness in between fifteen and thirty minutes; death quickly follows. One reminder was poetic, the other medical and sobering.

Despite this warning I felt called into the bay by sunshine and Bird Island in the distance. A slightly darker blue in a world of blue, the island rode the pale water about six miles to the south. At the start of the paddle I stroked through the strain of muscles that hadn’t been used in this way for several months. Push-ups and pull-ups alone did not maintain the muscles needed for paddling. I passed out of Yellow Bay and into the deepest part of the lake, about 370 feet at this time of the year. There were no other boats in sight, despite the clear skies. I reminded myself, If you have difficulty, you are on your own. I tried for smooth movements, not wanting to catch a blade. I settled into the rhythm.

As I approached the island I saw five pairs of unhappy geese. The island had been theirs until I showed up. Having found broken shells during summer visits to the island I knew they had nests hidden in the forest. I felt torn. On the one hand I really needed to land, to rest a moment in the sun and the lee, and on the other hand I knew I should leave the island to the geese. They became even more agitated as I pulled into the cove that I barely recognized despite dozens of summer visits. In April the large blocks of stone that frame the cove and the steep ramp of cobbles that form the beach were exposed. At this lower lake level the cove seemed much smaller than it did at summer’s full pool. 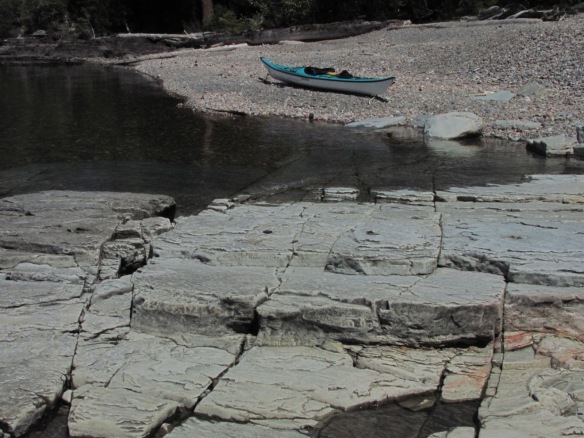 Knowing that I would disturb the birds, but acceding to my own needs, I landed on the island as quietly and gently as possible. I ate my lunch in a modest patch of sunlight on a rock as far from where the birds nested as possible. After eating I stretched briefly. Meanwhile, the geese paddled back and forth across the cove, anxious for me to leave. After a few minutes on shore I returned to Bluebird and passed the geese without making direct eye contact. About a hundred yards out I braced, turned around and saw that they had moved back into the cove behind me.

In the clear, cold air I could see my reverse destination and stroked for Yellow Bay. I pulled into the bay a couple of hours later, avoiding a fisherman lobbing lead and bait into the water. After landing I carried a few pieces of gear up to the truck. In the shade, maintained by the shadow of the truck, I saw that frost had still not melted.

On the drive home I reflected on the risks and rewards of early-season paddling. The danger of the cold had been obvious to me. But in paddling on such a day I had been drawn to two great wonders—the beautiful rhythm of paddling, the reach, pull and sweep, and the way the body’s core traces an invisible infinity symbol with each stroke. But I had also craved the expanse of the lake and evidence that life was beginning to emerge after a winter indoors. On reflection I realized that I should have left the island to the birds. This early in the season I should have stayed closer to shore; it would have been enough to play on the line between mountain shadows cast over the water and the great fields of light.

2 thoughts on “Paddling Lessons, Part I”