I did not see my father very often during his later years. I lived in Montana and he lived on Cape Cod. Transportation logistics and schedules combined to keep us apart, but toward what would turn out to be the end of his life I made a couple of visits. With multiple arms of the family at his house one summer in East Harwich, he and I used “walk into town for donuts” as an excuse to have some time with each other. As we walked in the deep grass of the borrow pit he said, “People are the thing.”

I often wonder what he meant and continue to speculate about the timing of his remark. His observation came back to me yesterday, the day after Memorial Day, when I paddled out to Wild Horse Island alone. Wind out of the northeast generated small white caps in the strait between Melita and Wild Horse Islands. I made the crossing into a quartering head wind, felt relief in the lee between Cromwell and Wild Horse, and then rounded the corner into Skeeko Bay. I thought I would have it to myself but found a cabin cruiser, bow to the gravel.

I checked the box where Fish Wildlife and Parks keeps the trail roster and saw that the boat belonged to a family of four from South Dakota. Bless the person who put a working pen in the box. I headed up the trail to the saddle that overlooks the strait to the south and The Mission Range beyond. When I stopped to take a photograph of a tight, new, and passionately purple pinecone 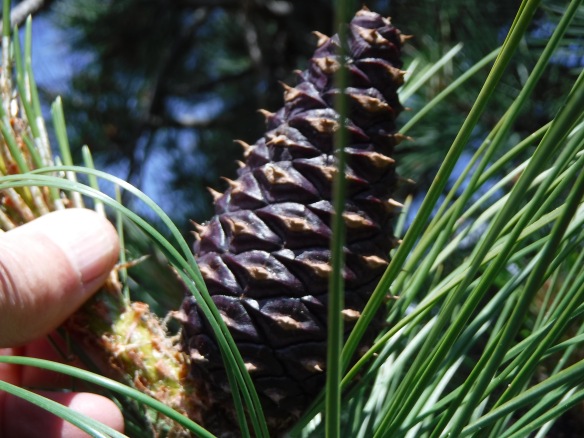 I was startled by a boy who suddenly approached me from behind. He was very anxious and his Down’s-affected speech made it hard for me to understand him. I took time to learn that he was looking for his sister and did not know where she was. Together we found her kneeling in the fresh grass by the old homestead cabins. As she tried to soothe and quiet him I took off for the ridgeline topped by the two pine trees where I often find Bitterroot flowers blooming in the hard scrabble. Clad in neoprene booties and bib, I must have been an odd looking pilgrim as I made my way up the slope and found the flowers that grow, improbably, out of rock on a southwest-facing slope. I took time to admire them individually and in clusters, looked out toward The Missions that, thankfully, still wear some snow and then scanned the open slopes for Bighorn sheep. Because I wanted to circle the island during the rest of the day I did not take time to sneak up on the sheep for a closer look. 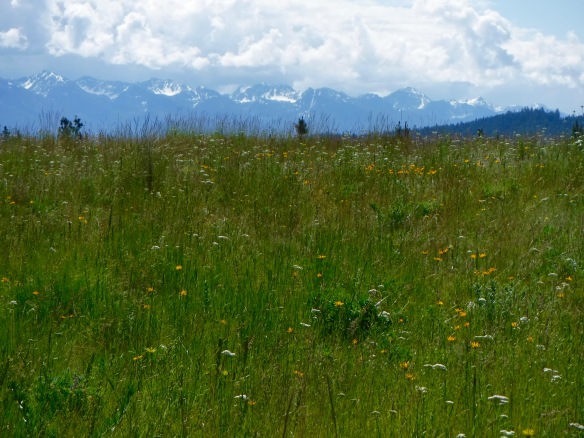 I headed down the trail, satisfied that I had visited what feels like a sacred site, but also excited about the rest of my paddle. On the way down, stepping carefully so as not to bruise a heel, I spotted the boy, his sister, and now his parents perched on a rocky promontory at the bottom of the ridge. Assuming that they might be strangers to the island, and thinking I might be able to orient them, I left the trail and waded through the grass to their perch. Approaching from below, I noticed a water bottle at the base of the rock pile. I looked up and said to the sister/daughter, “Is this your water bottle?” She responded, “Yes, I was just climbing down to get it.” “Shall I toss it to you?” “Sure” she replied. I made a good toss and she made a good catch.

Having now had two brief encounters I decided to climb up to their lookout. On the way I noticed more Bitterroots and pointed out that this was our state flower. We had a brief discussion about how native peoples used the roots and where the family might find the Bighorn sheep, if they felt inclined to seek them out. All the while I felt for the appropriate interpersonal distance in this encounter. Looking at them with a minimum of eye contact, it seemed to me as if they were almost stunned by the spaciousness around them, the light in the air, the mountains in the distance, the flowers at their feet. After a few more words I wished them well and slipped away. Though people are the thing I did not take a photo of this family; I believe it would have felt like a violation. Instead, I picked up the trail again and descended to my boat in the piles of storm-driven driftwood.

The rest of the day, paddling across the mouth of some of my favorite coves, taking time to explore the northernmost tip of the island, pausing to eat a plastic container full of rhubarb crisp, picking up speed in the subtle current along the east shore of the island, I thought about this encounter and my father’s assertion. What would the flowers be without our admiration? What would the sheep be without us as they ruminate on the slopes made lush by recent rain? What would the eagle be, nearly hidden inside a willow, without my quiet visual intrusion into its green roost? Of course the world would be fine without us, and in many cases would be much better without us. But potentially we are here as perceivers of what we find. The world offers itself to our imagination, as Oliver says, but first to our observation. It gives itself so that we take notice. It may even need us, the most transient of all, so that we will praise it, or so thought Rilke in his ninth Elegy. People are the thing because of our capacity to be aware, to recognize patterns, make connections, and see relationships between things.

So often paddling alone, at home by myself out in the wind and the waves, I find that these human encounters register on my consciousness with surprising force. I felt the boy’s desperation as he searched for his sister somewhere on the big and strange island. I felt for his sister as she became separated from her water bottle and struggled with ambivalence about her brother. I felt for their mother as she admired the Bitterroots and wondered at their place in native culture and history, a history that may have been her own. I felt for the father as he carried responsibility for conducting his family safely through this new world. And as we all do, we feel for the strands of connection and the right forms of distance, our capacity for this subtle awareness equally amazing.

On the way to donuts, craving our own quiet conversation, my father tells me that people are the thing. It falls to me to figure out what he meant. I get to finish the puzzle. A few pieces begin to fit together like bracts on the cone.

2 thoughts on “People Are the Thing”